Is the Bonusgate Corruption Scandal a Campaign Issue?

House Majority Leader Wouldn't Agree to Debate Until Learning of this Commercial Hazleton, PA- In Pennsylvania, the House Democratic Majority Leader, Todd Eachus, a fourteen year incumbent, refused to debate his opponent, Attorney Tarah Toohil, a 31 year old political newcomer and Republican. Tarah Toohil has repeatedly requested a debate since August 11, 2010. Until news broke of this debate commercial, Eachus was still in hiding. For example, he refused a debate to be held by the Times Leader and an issues forum to be hosted by the Standard Speaker, the area's two local newspapers. Tarah Toohil's camp contends that Eachus was avoiding a debate as he cannot answer questions due to his ties to an ongoing Federal Investigation and separate State Investigation "Bonusgate" in which he is embroiled.

See the Debate Commercial on YouTube: http://www.youtube.com/watch?v=j0U7J374wPcSee attached video of the Debate Commercial. Following this commercial, Eachus did agree to a debate, however, only in a closed door, pre-taped forum, excluding the public. Toohil replied, "I can't wait. It's about time." For more information go to www.toohil.com or email vote@toohil.com.

PAID FOR BY THE COMMITTEE TO ELECT TARAH TOOHIL
Posted by Tarah Toohil at 4:10 PM 2 comments: 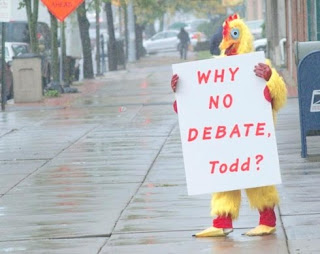 Posted by Tarah Toohil at 7:36 AM No comments:

On Tuesday, September 7, Candidate Tarah Toohil served a list of questions on her opponent, Representative Todd Eachus which sought answers referring to Mr. Eachus's role in the Bonusgate corruption scandal that has rocked Harrisburg. It was requested that these questions be answered by Thursday, September 9, 2010 by 5pm. As of noon on Friday, September 10, Representative Eachus has chosen to ignore these questions and remain silent.
"I truly felt that these were simple and straight forward questions. The fact that Mr. Eachus has chosen to hide from these questions and from the people who put him in office saddens me but it does not surprise me. These questions would be quick and easy to answer, if the person answering them had nothing to hide" said Toohil. "Since my opponent has exercised his right to remain silent on the corruption scandal and chosen to not answer these questions, I can only assume the worst."

Eachus, through a paid campaign spokesman has attempted to dodge this issue, stating that he did not receive the questions, then refusing a copy of the questions when offered by a member of the media. Mr. Eachus doesn't believe that his role in the corruption scandal is a "campaign issue" and hopes that it will get swept under the rug. However, Toohil vows that she will not let up until Mr. Eachus finally talks to the people who put him in office.

"The people who put him in office deserve answers. The people deserve to know the full extent of Mr. Eachus's involvement in this corruption scandal" said Toohil. "Why won't he answer these questions? What is he trying to cover up?" questioned Toohil.
"This is just another example of Mr. Eachus refusing to listen to the concerns of his community. I am running for the people. Mr. Eachus is running from them" said Toohil.
Posted by Tarah Toohil at 12:45 PM No comments:

On July 14, 2010 the Standard Speaker ran an article entitled “Eachus: More tough choices ahead.” The problem with this year’s budget is that only the taxpayers are being asked to make tough choices. The Legislature lined the budget with more money for themselves while decreasing services to such groups as Veterans (a $1.26 million reduction), student PHEAA grants (a $15.3 million decrease), and State Police (a $7.1 million decrease). While local libraries suffer from a statewide funding cut of $5.5 million dollars, the Arlen Specter Library is being created in Philadelphia with $10 million dollars of taxpayer money. This makes no sense. Are we supposed to drive our children to Philadelphia for good books?

This year, families had to make the tough choice of not going on vacation because they cannot afford it. At the same time, our legislature increased their own legislative budget by $1.3 million dollars. This is only to be expected from a representative who collected $26,000 in per diems last year ($10,000 of which were racked up during the budget impasse).

This is the same representative who voted himself a pay raise and gave himself a 50% pension increase. Currently, our legislature is under fire for being one of the most expensive, bloated legislatures in the country. It is also the subject of the Bonusgate Grand Jury investigation which alleges lawmakers are illegally using tax dollars to campaign and maintain their well-paid, well-perked positions. Increasing the legislative budget is an insult to the taxpayers and the agencies that will go without this year. This is a classic example of how our legislature treats us, the taxpayers: Do as I say and not as I do. We Deserve Better.
Posted by Tarah Toohil at 7:19 PM 1 comment:

Toohil: Misuse of Taxpayer Money IS an ISSUE

My opponent has tried to ignore the Bonusgate Corruption Scandal where millions of dollars in BONUSES were paid out to state employees who did political work illegally on state time. This is the way my opponent has been running Harrisburg.

My opponent wants to ignore the fact that he collected over $27,000 worth of per diems in 2009 which he then used to purchase a second home for himself in Harrisburg. Per diems are supposed to go towards renting a hotel room and paying for food ($163 a day= $111 for hotel + $52 for food). Mr. Eachus, since you bought yourself a house and paid your own mortgage with taxpayer money... will you return the money to the taxpayers?
Posted by Tarah Toohil at 7:12 PM No comments:

Here at home we have an unemployment rate at 13%. The highest in the state. Yet, my opponent has a job available which he is only offering in out of town newspapers:

"PA House Majority Leader Todd Eachus seeks Field Director for 2010 re-election campaign. Pennsylvania House Majority Leader Todd Eachus seeks a Field Director to join his re-election campaign. This position offers an excellent opportunity to gain a unique knowledge of a key area in a major swing state, make connections with key constituencies in the Democratic Party, and to successfully run a field campaign for both this race, and in conjunction with the coordinated ticket here in Pennsylvania. The responsibilities will include: Executing the field plan in place Managing canvass teams and volunteers Volunteer recruitment Meeting contact and vote goals daily and in each ward Various other tasks, as per the needs of the manager and candidate Qualifications: Willing to work smart and hard, as well as long hours. Willing to relocate to Northeast Pennsylvania. Ability to think quickly and work independently. Commitment to the Democratic Party and it's success. Any takers?
Posted by Tarah Toohil at 7:02 PM No comments:

Tarah Toohil attended the Public Informational Meeting on August 31, 2010 regarding a Permit Application by Hazleton Creek Properties in order to listen to the concerns and opinions of the many members of the community who attended the meeting. Toohil stated, “As a member of this community, I have been following this project for a long time now. I have serious concerns with the environmental impact of flue gas desulfurization (FGD) gypsum and other materials on our generation and future generations. I will fight to protect the health, safety, and welfare of the families in my district.”Toohil was “thoroughly unimpressed with the DEP representatives and their inability to answer the community’s questions whether general or specific. It is insulting that DEP would come to our community without bringing any research or facts. DEP did not even bring a copy of the permit application for the public to view.”

Toohil described Representative Eachus’s time at the podium as time spent “grandstanding” and his subsequent attack on Toohil as “political opportunism.” “I went to the meeting to listen to the people not as a political maneuver or a way to get my name in the news as Mr. Eachus is doing. I attended the Public Hearing in order to gather information and facts on the new permit application, listen to the concerns of the citizens, and answer their questions.”

Toohil stated that, “The job of a State Representative is to listen to the community’s concerns and to answer the questions of all of the people in the community whether he agrees with their opinions or not. Mr. Eachus’s attitude towards one constituent in particular was arrogant and disrespectful. When elected, I promise to never treat a constituent in such a way as he did last night.”
Posted by Tarah Toohil at 6:26 PM 1 comment:

Tarah Toohil
Hazleton, PA, United States
This page is dedicated to the exchange of ideas and opinions. The purpose is to show that people can agree to disagree and at the same time learn from one another. Paid for by the Committee to Elect Tarah Toohil